I’ll write about Saturday and Sunday later when I get more pictures!

Didn’t take that many pictures this year, no video. Either had too much stuff to carry around since we didn’t get a hotel room or I couldn’t because it was WAY TOO CROWDED.
Honestly, this year Fan Expo should have been called ‘Fail Expo’. Or Linecon. It was pretty bad. >:
But I shouldn’t be complaining too much because I got in for free. (Volunteered last weekend.)
Chelsea arrived at my place on Thursday and we worked on finishing our costumes. We marathonned 6 episodes of ‘High School Of The Dead’ – which is a pretty good animu, I must say. ­¤śĆ
We finished painting her bomb for her Link cosplay (we added the word ‘Photo’ onto it so it was a ‘photobomb’ – GET IT? :D) And finished painting her sword. We ironed everything and set everything so it would be ready for Friday. I, being the loser that I am, decided it would be cool if we put a sparkler in the fuse part of the bomb so it would look like it was really lit. Except I pushed the sparkler too far down so it melted some of the rope. (which was made out of a plastic hula skirt we bought from the dollar store orz) 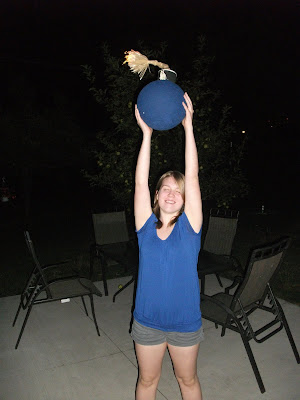 = melting plastic /sob;
On Friday, we woke up at about 10 and went to buy chinese buns and chips to snack on. We bussed to the subway station (the ticket collector thing wasn’t working so we got on the bus for free!) We took the subway up to Ossington station where we were forced off the subway because of a ‘smoke detection’ at Spadina station. We found these other 3 guys about our age who were also going to the convention and we hung out with them. One of them said their mom could drive us. ABOUT 2 HOURS HIS MOM DID NOT ARRIVE so we decided to ditch and go to the subway and just go and pick up our tickets. They tagged along, but Chelsea and I kept giving him angryfaces because he wasted 2 hours of our life >___>. Lesson: DO NOT WASTE YOUR TIME WITH FAILURES. D:<
When we arrived, there was a huuuuge line waiting to get into the building. We went into the hotel to pick up our passes and got in ahead of everybody else! We sat there for a bit, Chelsea photobombed people, lurked the dealers room a bit and met up with some people. Also met up with Ackson, who decided to be a jerk towards me like usual. ­¤śø He had his awesome steadicam and everything! He was shooting footage for his new Fan Expo video! (I’ll post a link when it’s up~) Friday was really quiet so we went home.
Oh, I was also cosplaying Akiyama Mio. (school outfit version) :3
Chelsea was really motivated because this was her first big convention. I was finishing up Hiiragi and getting everything ironed and finished painting our fans. This is what the downstairs bedroom looked like! So messy, sobsob;;; 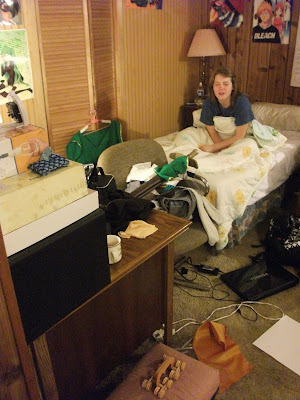 I was werkin on dem cosplays and Chelsea was really tired. This was taken at like, midnight. 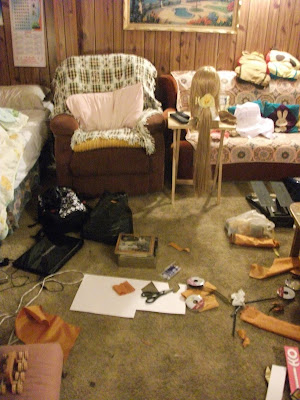 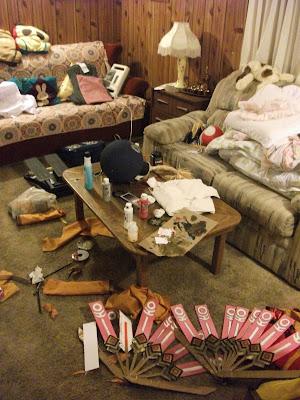 So messy! XD
Also, here’s the first picture I found of our Saturday cosplay! XD 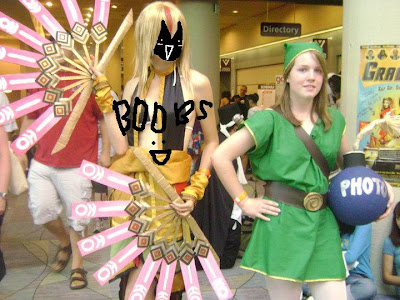