O hey guys! Time for FAN EXPO CON REPORT – SATURDAY!
(Before I continue though, I found a picture of my Mio cosplay from what I wore on Friday! :D) 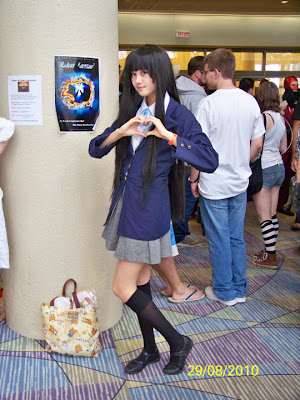 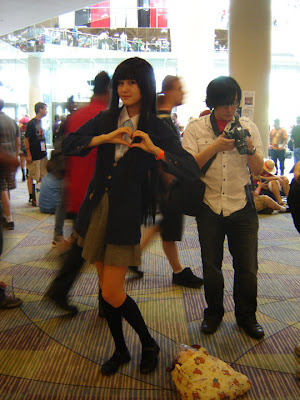 This dude came and took so many pictures of me – hopefully I can find them! ًںک€
And hooray for doing the same pose all weekend! /shot – I wasn’t even doing the moe moe kyun pose, just kind of reverted back to this one! ;-; I WILL MOE MOE KYUN WHEN I GET A MAID COS. ًںک€
Saturday morning – I woke up at about 7am but Chelsea was still fast asleep so I decided to let her rest for a bit. (I think Friday was a bit emotionally draining for her with the con being so crowded and all!) I have no idea why but I decided to play RuneScape for an hour. Honestly haven’t played that game in so long, and was surprised to find that I was like level 60 something. (I have very high fire-making and cooking levels, ohohoh /shot repeatedly)
When she woke up, we ironed out our cosplays one more time and then went upstairs to put on our makeups and gather our things. I had to stuff an extra pair of shoes into Chelsea’s bag just in case my Hiiragi shoes started hurting. I also brought a light jacket because I found it to be kind of chilly outside. (Hiiragi practically has no top.)
My dad went and ranted for like half an hour, telling me not to go on public transit because I was going to be raped or something. Which was fine because I doubt I would een have the courage to get on public transit dressed as Hiiragi, LOL! He drove us there and dropped us off outside the convention centre!
OMG THE LINES. The lines were freaking ridiculous! Holy crap. I’m not even joking- the lines wrapped around the entire block! And those were the lines for re-entry! (Re-entry means you already have your pass so you want to re-enter the convention hall) Oh god. It was horrible. Chelsea decided to wait in line to save me a spot while I went and had my .hack symbol tattoo thing painted on my back by Jean. (All .hack characters have strange tattoos or symbols on different parts of their body – Hiiragi has these awesome designs on his back! I’ll see if I can find a picture of my back~!)
When I came out, people had already started going inside the building and the line had shortened quite a bit. I’m not sure how, but I got through the VIP entrance which meant I didn’t have to wait in line.
Chelsea and I met up for a bit – she wanted to explore the dealers room some more so I stayed downstairs and watched her stuff. I lounged around there, met some of my cosplay friends, took some pictures. Guy (

on deviantart) came over to my spot and gave me the Black Rock Shooter poster he bought me at Otakuthon. HOTTEST POSTER EVER, nuff said. (I think it was drawn by Nayuki-chan on deviantart?) He was really nice, so much taller than I thought he was. D: I wanted to see his Lelouche cosplay so I told him to go change.
After Chelsea came downstairs, I bought her some food/drinks because she didn’t have any money left. She said that she felt really tired and didn’t really want to stay for that long. :C I honestly really didn’t want to leave the convention that early, especially on the Saturday. So we sat down for a bit by the glass windows. There were large groups of people outside that were lined up because apparently the convention oversold tickets and they weren’t allowing any more people inside because of maximum capacity! o___o!! That’s when we saw Guy again, this time dressed in his beautiful Rerouche cospray. And then Dario came over to the glass. We couldn’t really talk because there was a glass separating us, so we started typing things onto our cells and holding them up to the glass so the other person could read what we were trying to say.
Then apparently Matt Chin from the Conventioneers came over to us and started talking to us about how insane the lines were. (He was on the inside and the camera man was on the outside). I had no idea who he was – I thought he was just some random asian guy talking to us for his webshow or something… But yeah, at least he didn’t start insulting us like apparently he does to other cosplayers. :3
Chelsea was really tired and cranky at this point, so I lent her another $5 so she could take the GO train back. She was also kind of pissed off for some reason and made me carry my extra crap instead of being a good friend and taking it back to my house. (She had to go pick up her things from when she slept over.) I had so many things to carry around. ;-; I was pretty much ditched the a second time that weekend, so I texted Guy to come save me sob;; I went outside and we met up with Lauren and then went behind the convention centre to where my other con friends were waiting. (Nicole, Dario, Nikki, Jeff, etc).
We sat there for a few hours and I thin Guy left, so Nikki, Jeff and I then went off to the side entrance where we sat again for about an hour and talked. It was getting late and I didn’t want to take the GO back by myself when it was really late so I left.
Then omg, scariest thing happened. This guy who met me at Anime North 2010 who started messaging me that he “liked” me, spotted me walking through the convention centre and like, confronted me. D: He was all like ” Seriously WTF, you’ve been ignoring me all weekend. You’ve been ignoring my messages and like, you’re being a total bitch. I come all the way from Thunderbay and you don’t even give a damn about meeting me?” etc etc, all these other mean things. I got really freaked out and got really anxious – being in crowded spaces with no real place to escape to made me start to panic. LUCKILY Mika’s brother Rhys was there and spotted me and ~CAME TO THE RESCUE~
Thank god, I think I would have started crying. ;-;
Anyway, Saturday wasn’t that great. Only went up in the Dealers like, once, and it was so crowded. D: Saw a Moe Moe Kyun mio figure but it was $170 fffffffff D:
Anyway, here are some pictures! ًںک€ 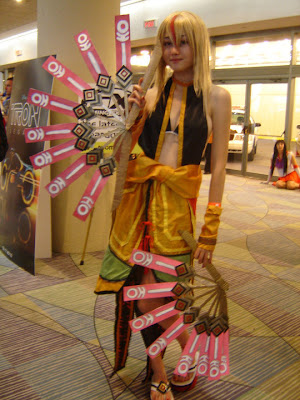 Picture of my Hiiragi cosplay! One of the few pictures I’ve found sob;;; 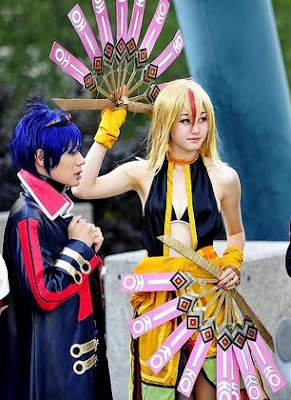 Two pictures from when we were hanging out at the side – Jeff is the Simon beside me. ًںک€ 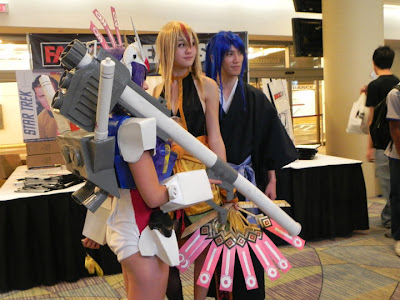 I tried talking to Bianca and Wil but we kept on getting bombed for photos! Bianca is the sexy Gundam Girl the left, Wil is the Traditional outfit Kaito on the right. ًںک€ 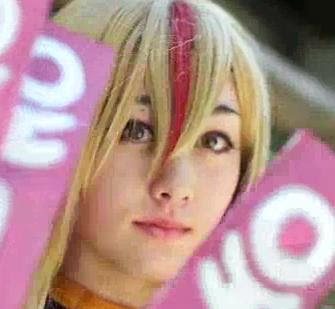 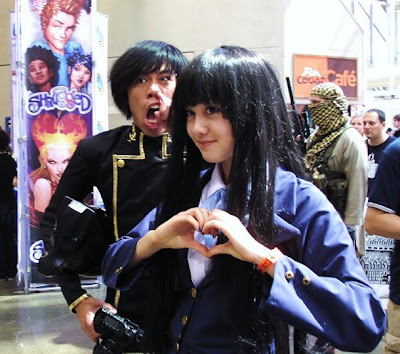 Ackson’s Lelouche (school uniform). How is this photo (bomb) not memorable? P: 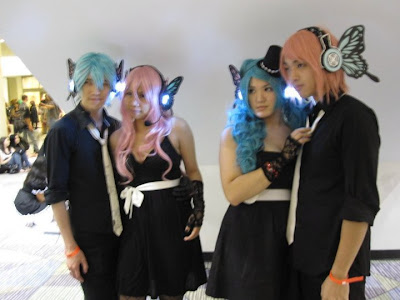 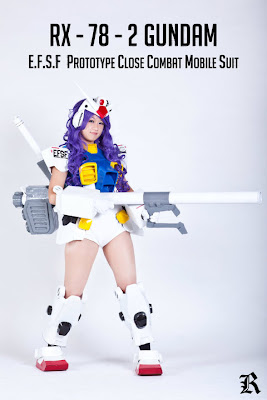 Bianca’s GUNDAM GIRL cosplay. HOLY CRAP THE MOST AMAZING THING EVERRRR. Can you believe that almost the entire armor part is made out of craft foam? AMAZING omg â™¥ 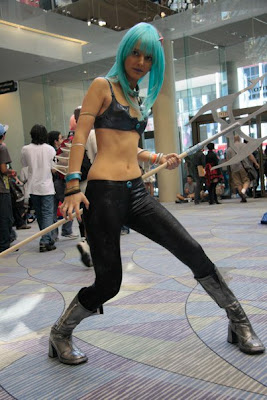 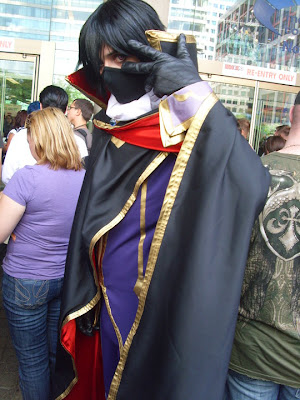