This is what happened on the Sunday of Fan Expo! (/what happened last weekend)
Got up at about 7:30, got dressed in my Mio outfit (minus the wig) and put my makeup on. I chose to wear Mio again because it’s casual, easy to move in, and people who see me would think I’m a girl going to a private school instead of somebody who likes to dress up like anime characters. Plus it’s not as weird of having to explain why I’m dressed like that when I see my friends or classmates at the train station. XD
Met up with Sami, her boyfriend and her boyfriend’s friend on the train! We talked as we took the train up to the station near the convention hall. When we got off, we walked to the hotel where Jean (Yui cosplayer) was staying and went to the washroom where we put on dem wigs! (Sami wore a really cute white one, she didn’t cosplay though. She just wore a cute outfit :3) We walked back outside and got in line to get into the convention! The line wrapped all the way around the block! Sobsob! It was so long, and was torture for me because dark uniform + long black Mio wig = dying of heat. Sami’s boyfriend and his friend went to wait in line to buy their tickets. (The ticket buying line was so much shorter than re-entry!)
We went inside, walked around the dealers room for a bit. After that, we met up with her boyfriend and friend again! Since it was his friend’s first con, Sami decided that we should do some events. We went to Anime Name That Tune!
As soon as we got in, I got a call from Mika that went “COME HERE RIGHT NOW I NEED TO MEET UP WITH YOU WHERE ARE YOU OMG MEET ME BY THE ESCALATORS” so I had to leave Sami &co. Dx
Mika was ditched my by her boyfriend who met up with my friends, and naturally used me as her backup friend! Þ
We walked around the dealers room for a little bit where we met up with her brother Reese and her boyfriend Nathan. Mika got me a really cute Rilakkuma planner/stationery thing, while Reese and Nathan got me 4 cans of coke. (It was a joke because my food supply for the weekend pretty much consisted of cans of coke. :P)
After that, they left because they wanted to go get somebody’s autographs therefore ditching me AGAIN D:
Guy called me and met up with me again! Ahh it was so nice of him because I think I dragged him away from his friends >: So we went up in dealers, looked around for a bit! I bought these really nice artsy postcards/prints! Guy was leaving later on and his phone was running out of batteries so we walked to his car and got his charger. We walked to the lobby of the hotel and sat there in the really nice chairs/couch for a bit while he waited for his phone to charge! It was really nice having a real conversation with him because I don’t get to talk to him often, face-to-face.
Ackson and a bunch of other people joined us and sat there talking. Guy was talking to some of his friends, Ackson was talking to one of his photographer friends, I was alone and felt really awkward so I got up and left. XD Nobody seemed to notice me as I left because a few minutes later I got a text from Guy going “Where did you go?”. Met up with Mika/Reese/Nathan for a little bit afterwards where they bought me some fries. :3 They wanted to go take some photos of Mika in her maid cosplay so they left. Met up with Sami&friends afterwards, left the convention early because it was getting boring.
All in all, it was an okay convention. Not sure if I’ll go next year. (I probably will, but I’ll just hang in the back by the CNTower to cosplay/do photoshoots or something.)
Fan Expo was a really unorganized convention this year. I can’t really complain that much though because I got in for free. Þ
Here are some more photos! 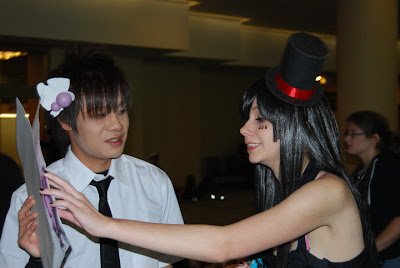 Jeff and Nikki! AH THEY’RE SO CUTE! Both cosplaying from K-On’s “Don’t Say Lazy” – Jeff as Male ver. Yui and Nikki as Mio! THEY MADE ME A CARD TOO! But I didn’t see them on Sunday so I didn’t get it! ): They mailed it to me though, still waiting for it to arrive! ~<3 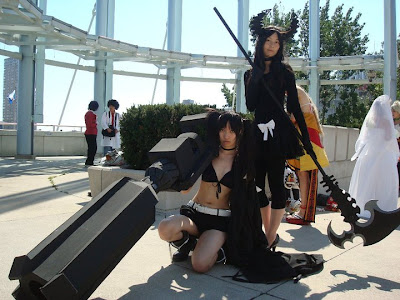 Fushi and her friend as Dead Master and Black Rock Shooter! OH GOD THAT GUN! <33> 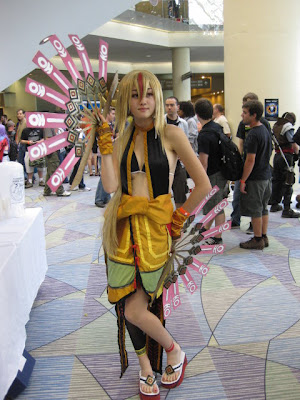 More Hiiragi cosplay from the Saturday~ 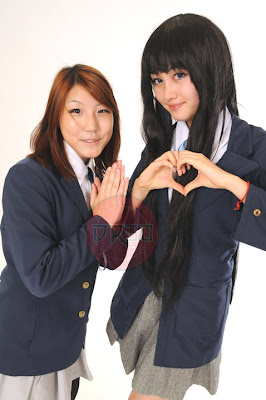 Jean and I cosplaying Yui and Mio! Our picture was taken for Super Kawaii Magazine! Þ She looks so moe in this, omg <333> 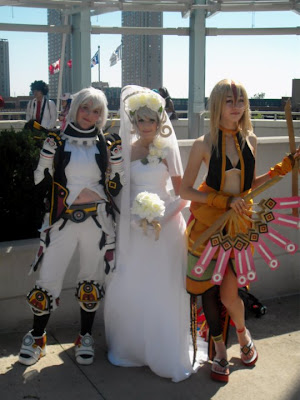 YEAH .HACK COSPLAY! :DDD Finally found some .hackers! Emily cosplaying an amazing Haseo (Xth form)! Ahh so badass! And lovely Sarah cosplaying Shino (wedding dress version)! Too bad we couldn’t find the Zelkova or Endrance – I saw them in the con but never got a chance to take a pic with them! >: NEXT TIME!! Þ
That’s it for now~ If I can find the picture of the design tattoo that Jean painted on my back for my Hiiragi cosplay, I’ll post it!
I might not be able to most as much because of school work, but I’ll try! (Since I love blogging so much :3) I’ll try blogging in comtec class!
Also, here’s a sneak peek at my newest cosplay! Saeko from HIGH SCHOOL OF THE DEAD!
We have a cosplay group for the Toronto Zombie Walk – it’s like a parade where everybody dresses up like Zombies! Hopefully I’ll be able to get some good pictures with my group! I’ll ask Ackson if he can shoot some photos for us. :3
Bloody Saeko is bloody~ I look really tired and have huge eyebags, but I think you would look that way too if you were living in a zombie infested city! Þ 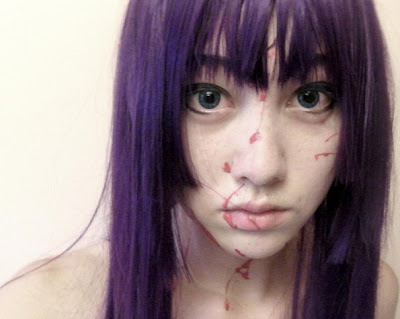