Today I when I came back home from school, I was welcomed with two very pleasant surprises! They were slips from the post office saying that I had to pick up two of my packages!  I didn’t really know what they were so I was pretty excited.

The post lady gave me two boxes ŌĆō one that was big and another that was relatively small.

The smaller one was the Skin79 Oriental Gold BB Cream that I ordered! I was very keen on trying BB Cream after hearing other beauty bloggers/vloggers rave on about how amazing it was. This was recommended to me by Chelsi! (Check out her blog~!) I’ll do a review on it soon, hopefully this weekend.
I didn’t really know what was in the bigger package. When I opened it, I saw…

(I got especially obsessed with Black Gold Saw, hehe ŌÖź) Anyway, I originally didn’t like Dead Master because I thought she was annoying and didn’t really like her design. Jean told me to wait because ŌĆ£Dead Master grows on you.ŌĆØ Haha, she couldn’t be more right! I started to feel more attached to her character.

This is the first statue that I own, that I’ve bought myself. I got a Suzumiya Haruhi statue from a friend about 3 years ago as a gift but it’s not nearly as epic as DEAD MASTER~

Here are some close ups!

Such a blank dead expression ŌÖź

Clothing detail! The ruffles are so nicely made!

DAT ASS. ŌÖź
I forgot to take a picture of the stand and her giant scythe… So here’s a picture off the internet… 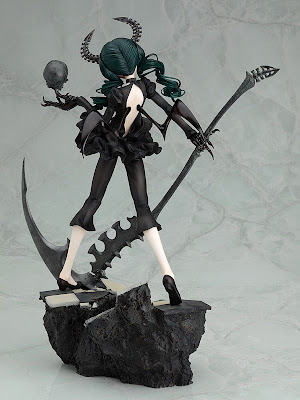 This figma is actually so so so pretty! I’m developing a special attachment to it because it’s my first~
I want to collect all of the Black Rock Shooter evil characters. (BGS, DM, STR), but they’re all kind of expensive! A friend is ordering the BGS figma for me and will give it to me at Anime North, so I’m super excited for that.
I’m so geeky!
And I will end with this super artsy photo~

That’s it for now, thanks for reading!