Hi everyone! A little scheduled post for you (so I’m technically writing this in the past! Ooooh~!~!~!)

Just a quick blog update between study sessions. Got my final exams coming up, hopefully I pass all of them!

Went to DTAC on December the 11th at the Metro Toronto Convention Centre. All of my opinions on the convention are entirely my own, based on my previous first hand experiences.


I’ve attended a good amount of Hobbystar events as a cosplayer (events like Fan Expo, MTAC, and DTAC.) They’ve had their issues which were mainly small things that I brushed off and didn’t really care too much about. Fan Expo 2010 was pretty horrible because of the giant lines/overcrowding/insufficient space for attendees, but I didn’t really care because I was able to get inside (they stopped letting people in half way through the day due to overcrowding so many people couldn’t even get into the convention, despite having bought tickets.) 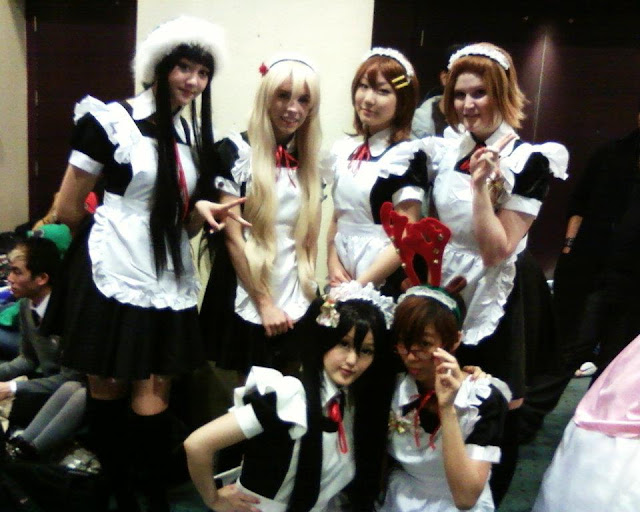 DTAC 2010 was actually really fun. No issues with security, Moetron (my cosplay group) and I could walk freely, there was sufficient space, and we could roam around casually without being hassled.

MTAC 2011 had some small issues with security, with them suddenly cutting off the convention space a few hours into the event. Other than that, it was alright.

Fan Expo 2011 was great – despite the jacked up event prices, there was sufficient space as they had rented out the bigger part of the Metro Toronto Convention Centre. We didn’t encounter any problems with security, everything generally went quite smoothly.

Now…DTAC. Basically, security was terrible. We were in the washroom getting changed, and the lady barges in and starts yelling at us to get out because lots of other people needed to get in. I found that the cosplayers were very polite, let people through who needed to get in, let them use the sink and gave them space. We paid for our tickets, I think we had as much right to use the washroom without getting kicked out as much as any other person.

Second, the convention space was basically half of a hallway. Here’s a pic that a friend took. 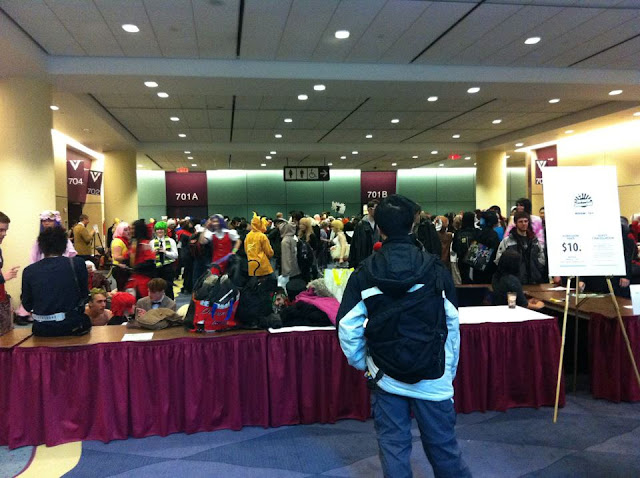 They were cramming people in, I’m positive they went over the limit for fire safety D: They were charging $10 for wristbands and continued selling after they had sold out. The main guest that was supposed to show up – voice of Goku for the English version of Dragon Ball, suddenly had to drop out. The dealers room was super crammed to the point where people were getting stuck inside and couldn’t move.

Obviously being crammed in that small space was going to cause people to wander out from the designated spaces… But security was hassling people to move all the time. Two of the security guards that confronted us when we were being interviewed by Theo of cosplayinvasion.com were still polite…BUT THEN THERE WAS THIS LADY.

Basically we were leaving. Just waiting for Ringo to finish up her interview, so Sami starts vlogging. The security lady comes up and yells at us to leave, smacks Sami’s hand (that was holding the camera) down. My camera, wtf. I was so pissed off, luckily Sami didn’t drop the camera! Ugh seriously this convention was such a disappointment. Security was treating us like complete shit because we were cosplayers, even though we paid for the event and endured the shit conditions. I can understand that they needed to make sure people weren’t wandering into other events/ unauthorized parts of the convention hall…but there was absolutely no need to be rough with cosplayers/treat them with disrespect. A simple “Sorry, this area is closed off. Could you please go back to the Anime Convention area?” would have been fine.

We ended up going to the North Building where there was no security and just lounged around. So technically we paid $10 each to stand in an overcrowded room with a shitty dealers room for about 3 hours, get harassed by security, and feel generally uncomfortable with the entire thing. We had much more fun in the north building, filming vlogs and doing our photoshoots. If not for friends, I would have had a terrible time.