I’m back today with a cosplay post! Anime North 2012 is less than one month away, and I’ve been getting work done on my Rorona cosplay. For those of you who didn’t know/don’t follow my facebook or twitter, I’m cosplaying Rorona from the RPG game for PlayStation 3 – Atelier Totori: The Adventurer of Arland 2. 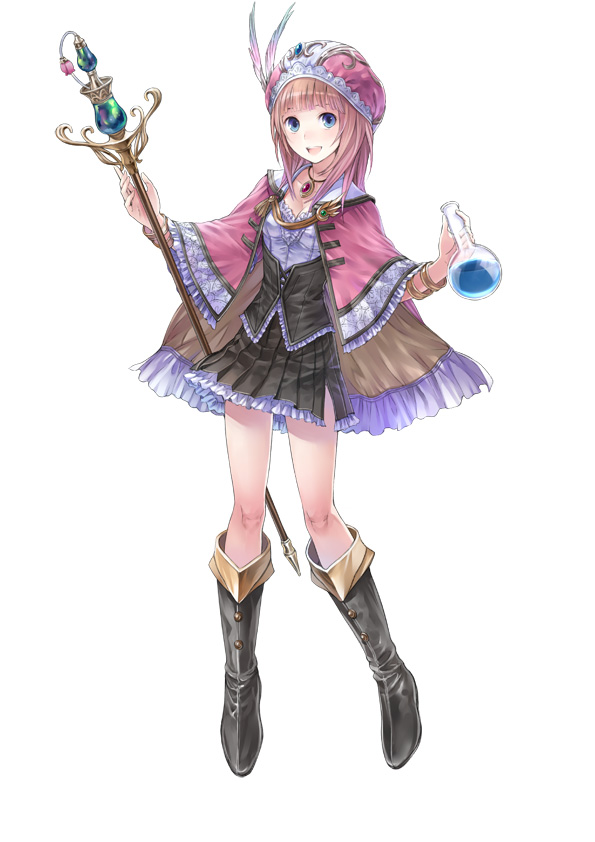 I was drawn to this design because she’s so cute! Her outfit is very comfortable and she has a small but intricate prop. After I cosplayed Black Gold Saw last year, I wanted to wear something less painful with a prop that wasn’t so huge. I have a feeling this will be my favourite cosplay so far! Compared to the other cosplays that I have made myself (Meiko and Mio), this is my favourite costume design.
Unfortunately, it looks like Ringo won’t be able to join me as Totori for Anime North. Genie won’t be able to do Meruru either since she’s going to China and getting back on the Wedsnesday before AN so she won’t have time to work on it. If Ringo decides to go to Otakon, we’ll have out full group ready for then!
Ringo and I are currently working on a backup cosplay for Anime North because we always cosplay together. I’ll still bring Rorona for a day though for a test run.
Annnyway, as you can see in the picture above, Rorona doesn’t have a bag. Totori does though (reference design above) , so I decided to design a bag for Rorona that looked in character, Atelier style. This way, I’d be able to carry around my stuff in a small pouch without having to carry around a huge bag that didn’t go together with the costume.
Went to Fabricland and found discounted leathery material, perfect for the bag!
First, I made a pattern out of newspaper, testing out possible dimensions. I made the dimensions of the bag a small-medium size. I left extra space around the actual size to sew the pieces together. Then I transfered the pattern into the pleathery material and cut the pieces out. 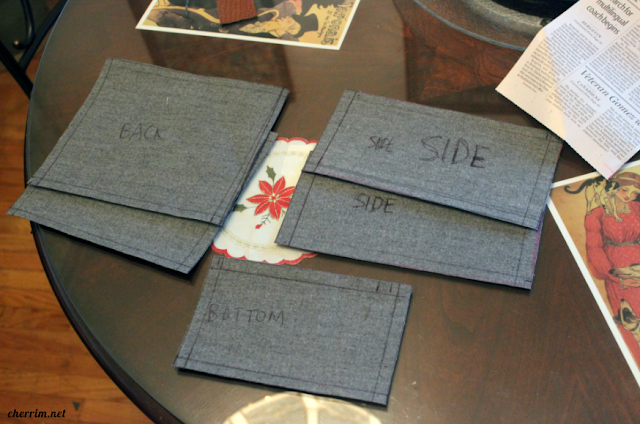 Here are all of the pieces laid out. 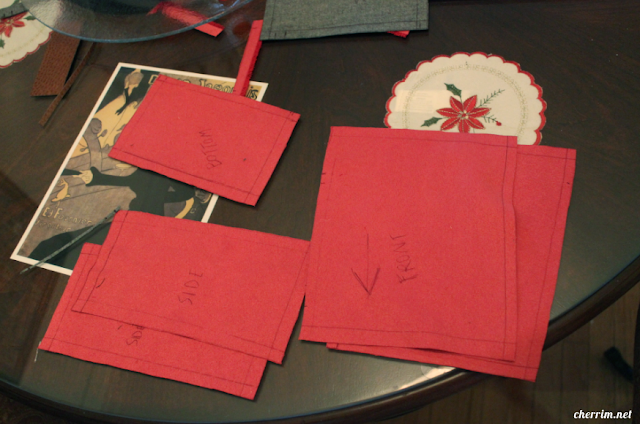 Since I bought too much pink sable suede for her cape, I decided to use the extra material to line the inside of the bag. I labelled the pieces on the ‘wrong’ side of the fabric (the side that wasn’t soft.)
The pink isn’t that bright either, it’s more of a muted raspberry colour. 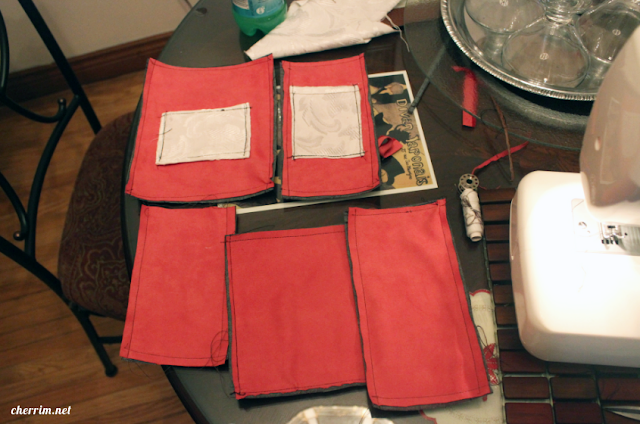 Then, I sewed pockets made from white drapery material (also extra material from the pattern that I was going to use on the white part of her cape.) I sewed the pink onto the other side of the pleathery material. 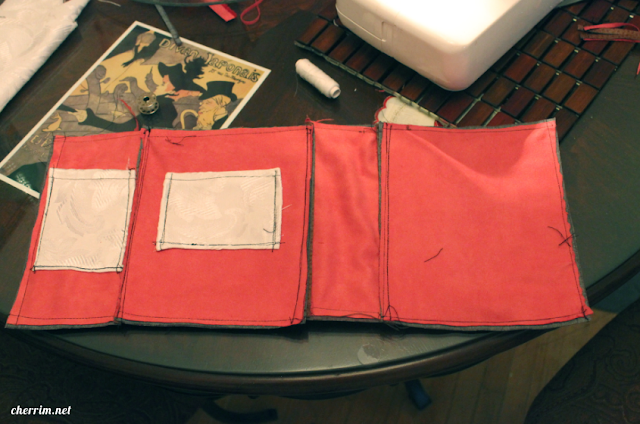 I attached the pieces side by side. This way, I’d only have to attach the bottom and then sew up the sides. (lol you can see all of my loose threads, oooops.) The pocket on the far left is for my iPhone, and the one next to it (which is the front of the bag) is for small things like cards or makeup, change etc. 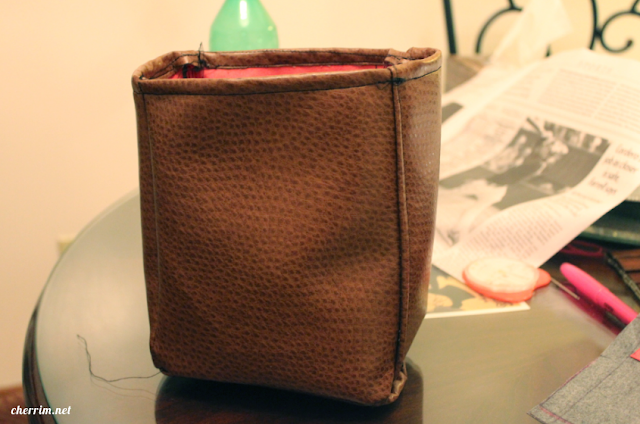 When I sewed it all together, it looks like this! (The left side of the bag in the picture looks a bit wonky, but it’s because I didn’t straighten out the bag properly.) I folded in the top, still going to fix that. 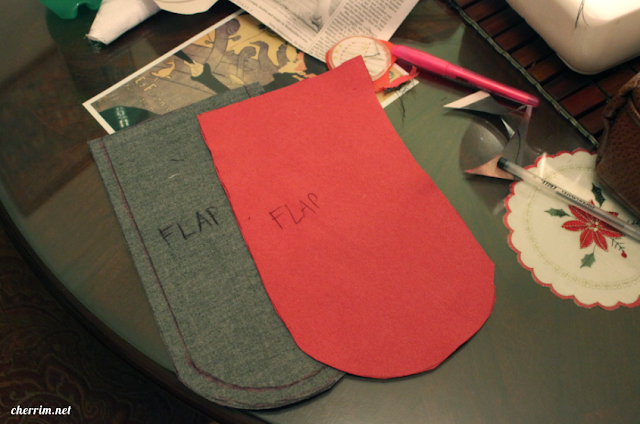 Next, I cut out the patterns for the flap. I sewed them together like what I did with the other pieces. 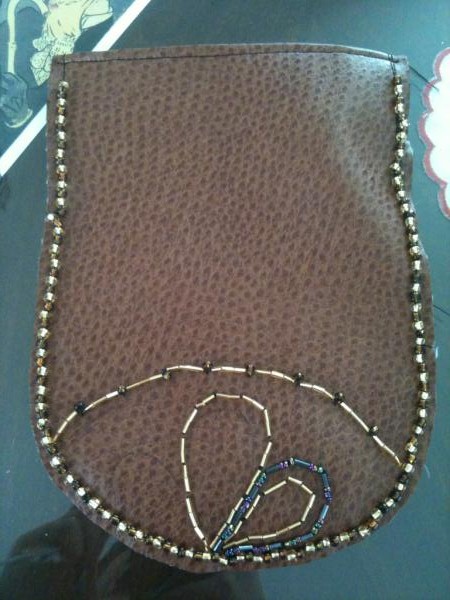 The flap itself looked really boring so I decided to add some beaded designs! Totori’s bag has a sun and moon design, so I decided to use a floral inspired design. Beading took forever, orz. 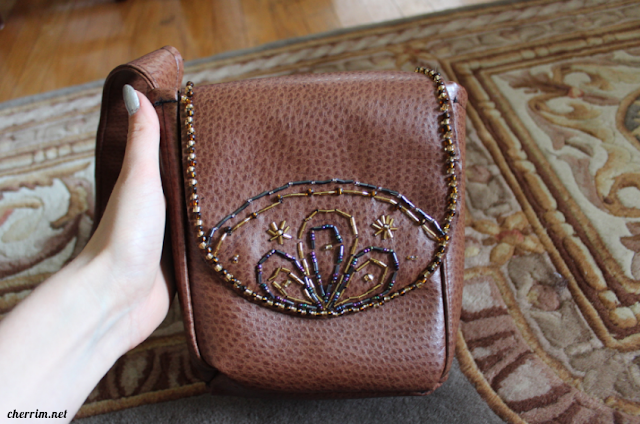 Taadaa! For my first time doing pattern beading, I’m quite pleased with the design! I think it suits the Atelier designs quite well. 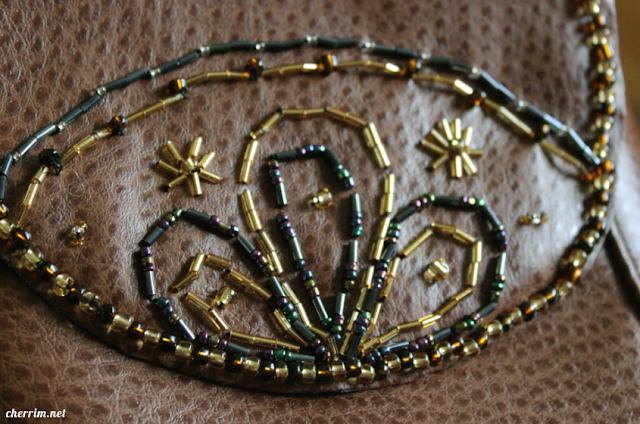 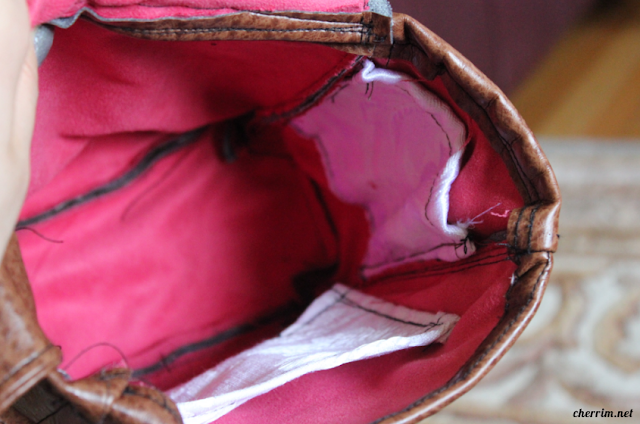 What the inside of the bag looks like. It’s still a bit messy, I have to clip all of the loose threads and sew on the other side of the strap.
Despite not being an official part of her costume, I’m glad I have a bag now! I’ve tried filling it. It holds my phone, camcorder, a bottle of water, my wallet, and some cosmetics.
I’ll be posting more cosplay progress soon! Let me know if you’re going to Anime North this year!
Oh, and I’ve posted two more videos on youtube. If you haven’t visited my channel yet, you should! ­¤śē I’m getting into the habit of uploading more often. I’ll probably vlog about my cosplay progress as well!