OH MY GOD LET ME TELL YOU ABOUT THIS YOUTUBE PANEL. Oh lord. It needs a post of its own.

First, some ~background info~. I had been talking to Dom and Daryl about hosting a Youtube panel at Anime North this year. We’re all very involved with the Youtube community, not to mention that our subscribers wanted a place to meet us… So, we thought what better than to host a panel focusing on Youtube – presenting the opportunity to meet other youtubers, discuss content creation, and meet new friends! 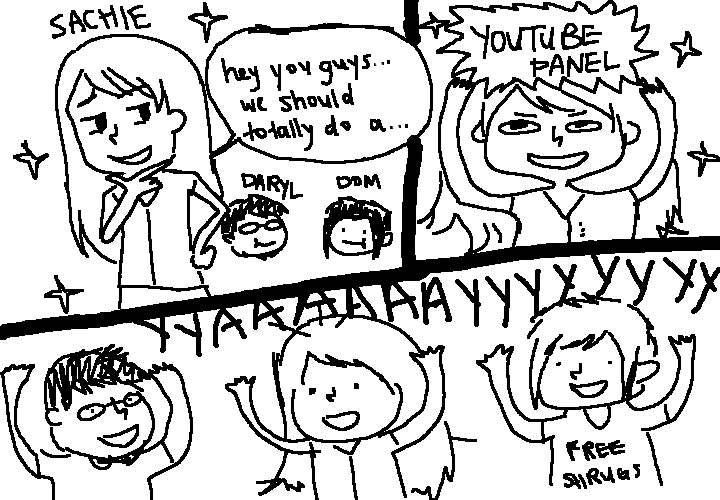 (to make up for my lack of photos, i’m going to draw pictures :D)

Our panel was rejected, with the reasoning that it was not associated directly to anime, and therefore was irrelevant. One of Dom’s followers had connections and was talking directly to the panel’s coordinator to help us get it approved. We then got an email telling us that we could have our panel, but it would be merged as a part of the Reddit panel – kinda like a ‘social media panel’. We figured we’d settle with that, until we found out the panel was going to be held at 10pm on the Friday.

Our followers are primarily between the ages of 13-20… The majority of which would not be able to attend such a late time. So we dropped out of the Reddit panel and hoped that things would work out.

We got another email a few weeks later notifying us that our Youtube panel had been approved! But it was to be held at….. midnight….on the friday.

Ok, I know not everyone can get the time slot that they want, but midnight on Friday? Our G-rated panel following right after a “Sex and the Single Otaku (18+)” panel? SERIOUSLY??

We emailed back asking for a new time slot. We appealed saying our audience couldn’t really make it at that time. We tried reaching out to the general programming exec. No replies. So we were kinda pissed off. But we figured we’d make the best of it. We were expecting 10, maybe 20 people to show up. So we just said it’d become a crack panel and we’d joke around and have a dance party or something. No big deal!

Basically, the room that our panel was assigned to was the “Halton Room” in the Doubletree Hotel. The room is small, around the size of a classroom. Seats maybe 30 or so people. The hallway was located along a hallwall of rooms.

Ringo, Genie and I arrive at the hotel, dressed up in our Kigurumis. When we get there, we were quite surprised at the long line of people waiting at the panel rooms! I walked over to the Halton room, and it was really crowded. Maybe 50 or so people were in line! Finally met Natsumi, Lily, and Cody! They were super nice. Met up with Dom and Daryl. We all agreed that the turnout was pretty big, awesome news! As soon as the previous panel let out, Daryl, Dom and I were led into the room. Shortly after, we were pulled out by one of the panel coordinators.

“What’s going on?” I asked.
“We’re moving you to a bigger room (the Mississauga Room)”
“Why? Is our room too small?”
The panel lady looks at me like I’m stupid. She pointed to the really long line of people that goes down the hallway, wraps around, and comes back towards us. “All of these people are here for the youtube panel.”

YOU GUYS HAVE NO IDEA HOW HARD I WAS WTFING.

There were at least 200 people in this line.

For a panel that was scheduled to be the last one on Friday. Going from 12AM – 1AM.

A WHOLE LINE OF PEOPLE. We all had such a huge shock! For a panel we expected maybe 20 people  to come to, suddenly, 10 times that amount show up! Nerves hit me like a wall of bricks.

We were ushered into the room. Now, this room was at least 4 times bigger than the Halton room. There was a lot of video/audio equipment set up. Lily and Cody were originally going to sit in the crowd, but since we had suddenly been given such a big panelist table, they were able to come up and sit with us as panelists! We even had a special guest, Dr Holocaust, show up at the panel unannounced! It was insane.

Soon, they opened the doors. People started pouring in. After a few minutes, the room was packed. And people were still coming in! This entire time, my heart was pounding. Daryl was freaking out. I kept exchanging nervous glances at Dom. I knew the majority of the people at the panel weren’t there for me specifically, but man, it’s quite nervewracking seeing so many people show up to hear you speak. My moetron waifus Genie and Ringo, as well as Thomas, were seated in the front row for ultimate Moetron support!

The panel started. We each introduced ourselves. Next, we talked about how we got into making content and video-making! I thought it was great because there was a wide range of panelist specialities. Clover knew most about film making, Daryl and I on vlogging, Dom for animation, Natsumi and Lily for parodies and songmaking, Cody for gameplay, and Dr Holocaust on character building/branding.

I tried my best as moderator to lead conversation / panel topics. I know some people were expecting the panel to be about youtube within the anime community, but we focused more on making content and starting up on Youtube! It was really fun. Even though we were all quite nervous, I think we relaxed a bit. About half way through, we did a bit of Q&A!

Finally, at the end of the panel, Daryl surprised everyone by doing a camera giveaway! NONE OF US KNEW ABOUT THIS! He said that a big factor in people’s decisions to make content for youtube is the lack of equipment. Cameras and video equipment can be quite expensive. He asked everybody who had considered videomaking to stand us. Then he asked each of us panelists to pick a person who was standing up. Everybody else sat down.

Then, we needed to choose somebody to win. One of the girls said she had a camera already. The people who were standing also said they had video equipment, and so kindly sat down! There were only two left. They did faceoff Rock Paper Scissors! One of the guys won, and Daryl gave him his own vlogging camera and 16gb memory card! Seriously, that was super nice of him.

What a great way to end the panel! After we left, we were all surrounded by people who wanted to talk to us and take photos with us. It was super surreal. I went from feeling like a total shut-in to feeling like a mini celebrity. Having people come up to me and say they like my videos, or how happy they were to meet me seriously made my entire weekend! You guys have no idea how happy you made me!!!

All in all, the panel was definitely the highlight of my weekend. I can’t express how much fun I had! You guys definitely showed the AN panel coordinators that the Youtube community is thriving and super active within an anime convention environment! Hopefully they’ll take this into consideration when Daryl organizes it next year! (Since I’ll be in the UK and and I think Dom/Natsumi/Lily/Cody are moving out to LA…?)