This post was originally posted on my Patreon account! I post a lot of cosplay progress on there (much of which is exclusive to Patrons.)
I recently finished up a cosplay that I have been putting off for about a year… Kashima from Gekkan Shoujo! A quick spur of the moment costume inspired by all the cosplay progress my friends have been posting on social media. (Katsucon is coming up next week and I won’t be attending, but that doesn’t mean I can’t join in on the cosplay fun!)
Kashima is a very fun, goofy character. She’s very tall and tomboyish, and charms all of the female students. There’a fun little youtube video showing some clips of her here! Overall Gekkan Shoujo is a fantastic series đź™‚
I’ll be breaking down the elements of the costume for you. It’s a simple and comfortable cosplay to wear. I’ve never done a tomboyish character before as I absolutely love cosplaying girly characters with long hair!

Makeup can really transform your look, especially when you want to look like a 2D anime character! The first picture shows my regular makeup, and the second and third show how circle lenses, stronger  winged eyeliner, contouring on the cheekbones and nose, and highlighting, can really change the way your face photographs. You have to over emphasize your features a bit for the camera. I think if I was at a convention, I would have added some blue eyeshadow or paint to my eyebrows in order to match Kashima’s dark blue hair.
I’m wearing the Puffy 3-tone circle lenses (15mm) in green. I did a review on my blog which you can read here – these are the same lenses I wore for Jupiter. I’ve got to throw them out soon so I thought they would be good for one last test run đź™‚

All I have to show you at the moment are mirror selfies as I don’t have any shoots or conventions coming up until Anime North, but I tried to show a few different angles so you can see the costume properly. This was a fairly easy outfit to put together. Most of the items were owned or thrifted! Her outfit is composed of a boxy V neck uniform sweater, a white dress shirt, and a red tie. I couldn’t find a deep V neck sweater anywhere! I had to modify a rounded collar sweater to achieve this look. The school emblem is made from felt. Moment of appreciation for the tie – IT WAS SO HARD FINDING A PLAIN DEEP RED TIE. I honestly didn’t think it was going to be THIS hard, but all the red ties in thrift stores had some weird patterns on them. Finally found them and pretty much sank to my knees, THANK U GODS OF COSPLAY. 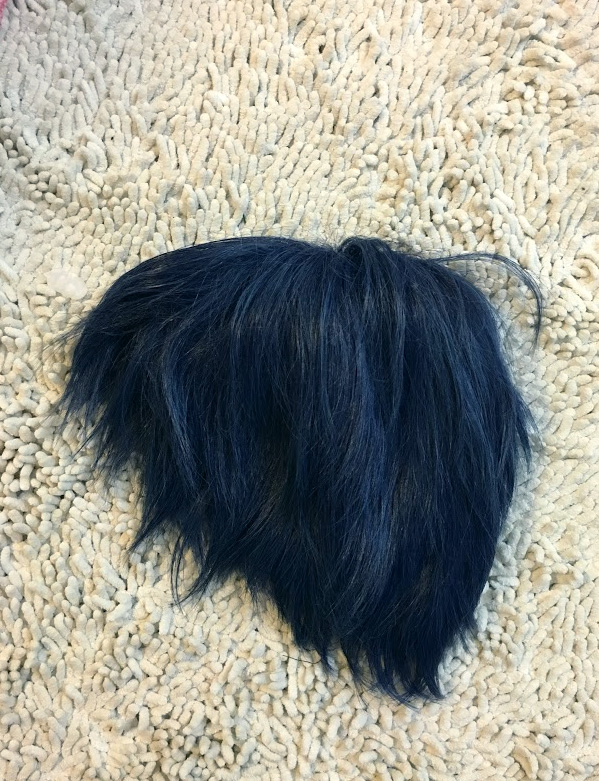 This wig is from lightinthebox! A short dark blue / navy coloured wig. It looks long in the stock photo but appeared shorter on me because I have a massive head, haha. Kashima tends to lean more towards the male uniform, but still wears a long skirt. I made a basic pleated skirt, super quick and easy for me now because I’ve cosplayed so many school uniforms! This is the tutorial I used when I was first learning how to sew pleated skirts. I’ve used these shoes for many of my school uniform cosplays. These ones are brown leather shoes from Naturalizer, picked up from the thrift store. They don’t have a heel and are super comfortable to walk in! I have another pair of brown uniform shoes with heel that I use for photographs because heels just look better. đź™‚ And finally, a few Kashima polaroids! I’ll be doing a giveaway for them later, but that’ll be a future post.
This post was originally posted on my Patreon account! I post a lot of cosplay progress on there (much of which is exclusive to Patrons.) I host monthly livestreams and polls deciding on my next video topic, cosplay, and tutorials! I an unable to monetize many of my videos due to copyright so I really appreciate all of your support. I’m very close to my next milestone, which includes a weekly anime review series!
Once again, thank you for helping me complete another cosplay!