To better understand some parts of this post, watch this video!

Went to MTAC this weekend! (March Toronto Anime Convention.) It wasn’t really that great of a con, but I wasn’t really expecting much.

MTAC was held in the same place as DTAC (December Toronto Anime Con), which was where we did our K-On cosplay. The only difference this time was that MTAC was a very last minute decision to attend and Ringo/Jean couldn’t attend! So it was just Sami and I.

There was also another convention, a hunting show of some sort, that was going on. Most of the people attending were macho looking white guys, some dressed in camouflage gear/holding fishing rods, lol. Apparently there was quite a bit of abuse towards the cosplayers, since the two different cons targeted clashing…social groups? I didn’t experience it myself, but I heard that some people got into fights.

Anyway, here’s how my day went!

Woke up at 8:30. Didn’t bother putting on makeup since I usually do it at the con. Dad drove me to the subway station. It was my first time taking the subway by myself! I was quite anxious because I didn’t want to get lost/forget to get off the train, haha. Took the subway to Dundas station, and met up with Sami in Eatons Centre. We searched for a washroom for maybe 15 minutes, then went and bought food. Then we took the subway to Union Station and took the Skywalk to the convention!

There was already a good amount of people at the convention when we arrived. We went to get changed! I realized that I brought the wrong wig with me – black instead of blue!

The black one was actually for my BLACK GOLD SAW cosplay haha!

So I wore that instead. Sami wore her casual Flickr cosplay!

At one point, security went around and evacuated this one area where we were sitting for no apparent reason! It was stupid. Then they started checking wristbands, and said to people who didn’t have one to either buy one or get out. Sami and I ninja’d into one of the panel rooms where a game of Anime Flash.

After a bit, we came out. Met with Katya, gave her a blonde wig that she wanted to buy. Got bored of the con, decided to leave earlier.

Here are some random camwhoring pictures! 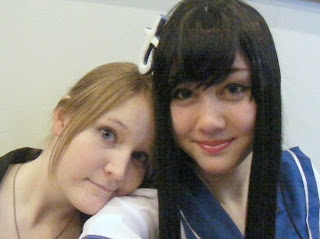 Sami raged at her wig by now and had taken it off. 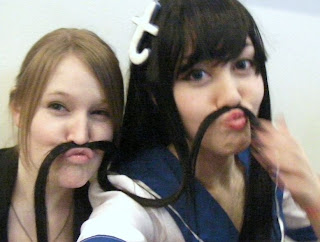 My favourite picture! I love how we contrast ŌĆō her in white and me in black! It’ll be even more epic when she wears Kirin (from Monster Hunter) and I wear BGS at Anime North!

Really tired, but need to finish working on my stupid English project.

Also, before I forget. Would you want to see more vlogs from me? I’ve just decided to upload my videos onto my main channel since I have the most subscribers there!

I think I’ll mostly vlog about trips, outings with friends, and cosplay things! What are your thoughts? ­¤Öé
Anything that doesn’t fit under this category, I’ll probably upload to my second channel : longcatplz @ youtube.com