As it turns out, I won’t be able to finish my Rorona cosplay for Anime North this year. I had all of the materials to finish it, but Ringo wasn’t able to finish her Totori cosplay since our schedules conflicted and we didn’t have time to meet up and work on our outfits.

Instead, we’re just putting it off until Otakon 2012 which takes place at the end of July! That way we’ll have more time to plan and meet up to finish our costumes.

As a very last minute back up cosplay, we have chosen to cosplay Pokemon trainers! 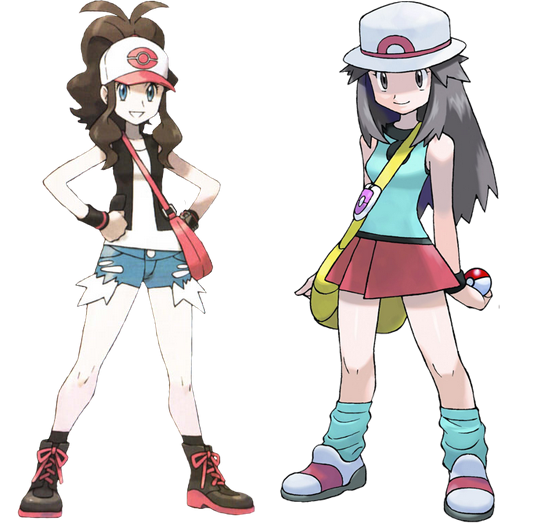 I’ll be cosplaying Hilda/Touko, the female trainer from Pokemon Black & White [left]. I’m really excited because she’s got a cute but casual outfit! It’ll be very easy to wear since the clothing is very comfortable and suitable for end of May weather! We’ll even have hats to shield us from the sun, and our costumes won’t melt off ! Hehehe~
I’ve filmed and photographed my progress, so I’ll be making a full how-to video and blog post! Illustrating everything from painting the boots to sewing the vest, and of course making pokeballs! I’ll be posting that soon. Just need to finish up little details like making the XTransceiver, bag, and the pocket things on her shorts.

Ringo will be accompanying me as the female trainer from Pokemon LeafGreen & FireRed. I’ve made her hat, the clip thing on her bag (I forget what it’s called), and pokeballs. Just need to modify the shirt, make the bag and skirt! It’s quite an easy outfit so I should be able to finish it.
I’ll be meeting up with her this Monday (Victoria Day, so neither of us are working) so I can use her sewing machine. Mine broke down this week! Broken sewing machine a week before the convention = apocalypse!

But we’ll be able to finish all of this on time.
Here’s my cosplay lineup for Anime North 2012. 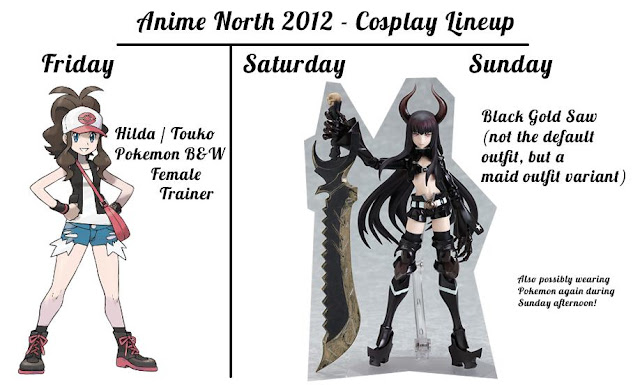 Yup, doing Black Gold Saw again this year! Also a last minute addition because of all of our cosplay plans falling apart. We’re planning to do a maid outfit variant because regular BGS was super hard to wear last year – it was uncomfortable with the long wig + armor breaking + feet dying in heels + heavy weapon. Our hotel this year is further than the one we were at last year so we decided it was too troublesome. Maid variant will still be cute! Just replace her outfit with a maid dress + stockings + regular shoes, but still horns and sword!

Haha and dark red bows. Same with BRS, but with blue bows and the canon! I’m looking forward to it.
Pokemon on Friday since it’ll be easy to wear for meeting up with people, as well as for filming vlogs and stuff. Probably changing into Pokemon again before we leave the hotel on Sunday because it’ll be easy to move around in and won’t restrict us as we drag our luggage down the street a few blocks to the DoubleTree.  Maybe even Saturday evening when we change out of BRS!
I’ll post a vlog on my channel some time this weekend explaining the final details of our cosplays, meet-up locations, etc. I look forward to meeting all of you! If I’m not able to post a progress post this or next week, I’ll post it after the convention before the con reports.

I’m trying to film a few circle lens reviews and finish the posts for them, they should be up over the course of the next week. It’s going to be a busy week!
What will you be cosplaying as for Anime North this year! ­¤śĆ (If you’re not going to AN, do you have any future cosplays planned? )