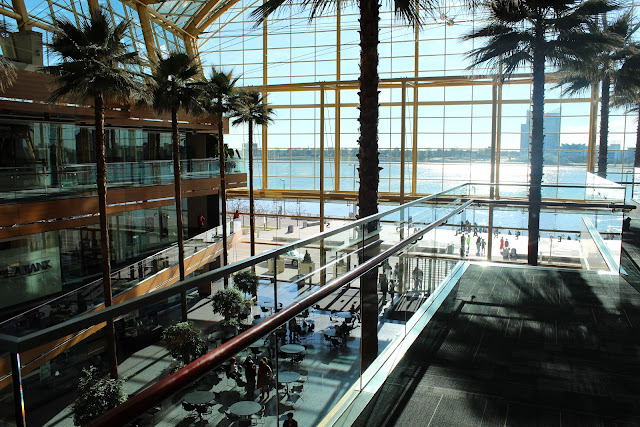 Hey guys! Sorry for not updating in forever. I’ll try to update more frequently! I’ll be uploading a few reviews within the next two weeks so please look forward to those.

Last weekend, I attended Youmacon in Michigan, Detroit with Sami and Genie! This was our first time travelling by ourselves (just the 3 of us, without our usual group of friends.) I slept over at Sami’s house the night before, which was really nice because it was the first time in forever that I actually got to spend some girly time with her ;_;

We left super early in the morning, as our bus to Detroit left at 8:45am. Genie cut it close and got to the bus station a few minutes before we left! It was 7 hour trip through the countryside before we reached the border. American border control is really intense – they are waaay more strict than the Canadian side haha! It was funny to see the officers check out bags and finding costume parts/colourful wigs.

We though the convention centre was a bit of a drive into Michigan  but it turns out that the RenCen is right next to the border offices! The greyhound station is about two miles in though, so we had to taxi over. ALSO, our taxi ride to the convention centre was probably on the scariest moments of my entire life. The taxi driver was this big, scary looking guy. As we walked over to his taxi, the other taxi drivers were catcalling at us. He tried to scam us by charging us $60 (for a two mile ride, what!?) but in the end we gave him $30 because we were scared out of our wits. (I was half expecting him to drive us to an abandoned building and kill us, YES IT WAS THAT SKETCHY.) 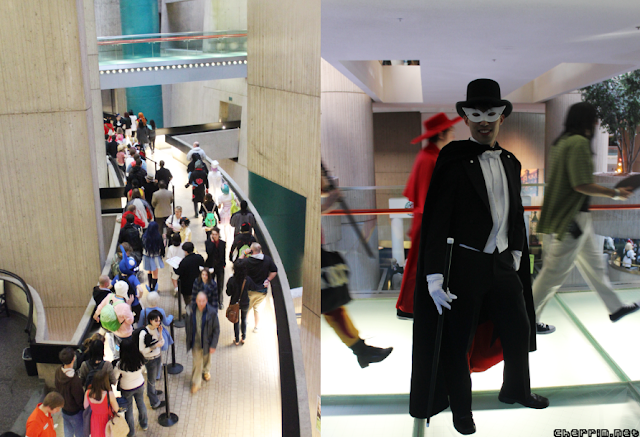 The convention center had the most confusing layout. The floors were arranged like a set of rings, but stairs/escalators were located at random spots. I think we figured out how to navigate the convention easily on the last day…. Carroll actually cosplayed as well! As Tuxedo Mask! 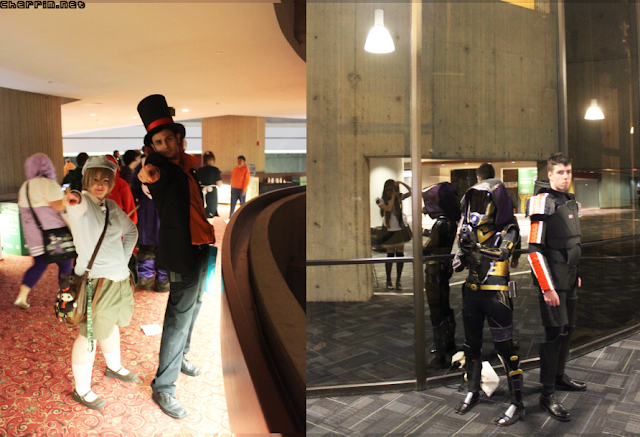 YESSSS found a Professor Layton and Luke cosplayer! ­¤śĆ They did such a great job! Also found these cool Mass Effect cosplayers with impressive armor! 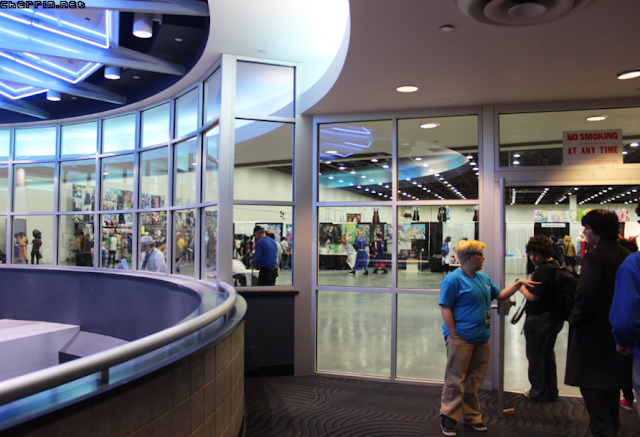 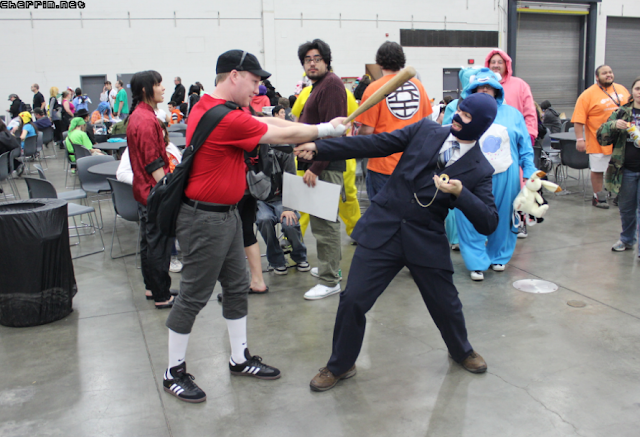 THERE’S A SPAH AROUND HERE 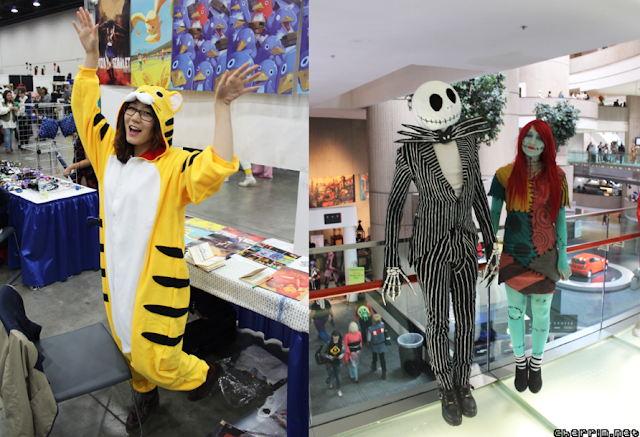 Genie finally got a Kigurumi, so it now we all have cat kigurumis! / Absolutely amazing Jack and Sally cosplay! 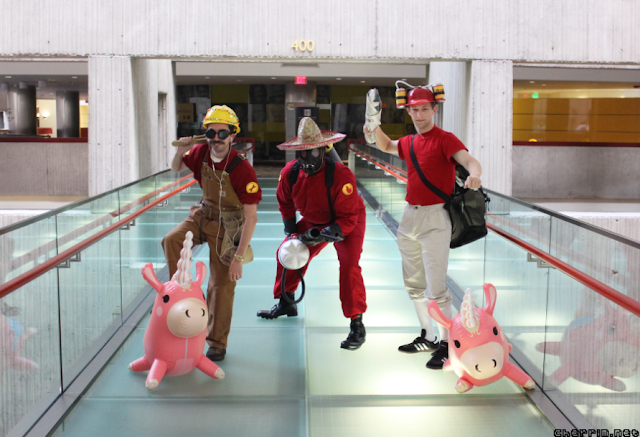 The most perfect TF2 cosplayers in the entire world. Seriously, these guys were amazing! And so enthusiastic! The Pyro even did the taunt pose after I asked him, but the photo was blurry. After seeing so many great TF2 cosplayers that weekend, I was highly regretting my decision not to bring Fem!Scout!
Seeing such great TF2 cosplayers motivates me even more for my Sniper cosplay! 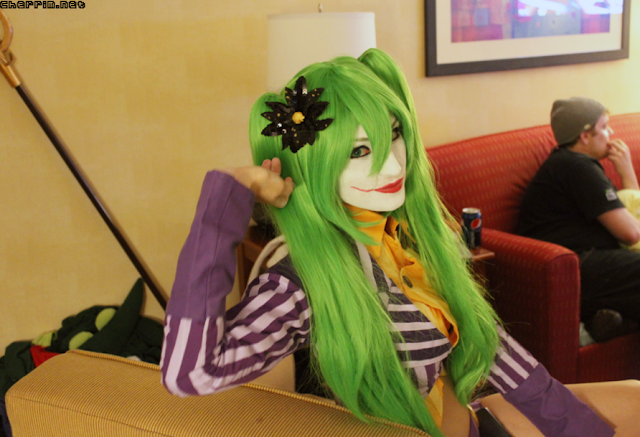 Pretty Kelly/Gammo as Fem!Joker! Sorry for the terrible lighting – this was taken in our hotel room. Due to some unfortunate circumstances on the convention’s behalf, Nina decided to cancel our hotel reservation, resulting in us rooming with Solo! There were 20 people rooming in our room, I kid you not! It was a “comfortable” 20 though. Sami and I had our own little section that we slept in, which happened to be right beside the A/C, therefore we were freezing on Friday night. Oh, and the hotel decided to deactivate everybody’s room cards on Friday, so we were trapped outside of our room for a few hours until it was all sorted out. On Saturday, some people in the room lent us a blanket which was so much nicer, I think we fell asleep instantly because it was so warm and snuggly. All in all, Youmacon was a bit of a disaster. Sami and I had press passes and were looking forward to interviewing special guests/cosplayers! We were told in our media email that we would be receiving a schedule of interview times/press events, but we didn’t get those, and the staff seemed to be confused. Also, it was a bit of a hassle that the artist alley/dealers room were in a separate building that was located a few blocks away. We had to take a monorail to get there. To top it all off, we were exhausted all weekend from our travels/ having to sleep on the floor, which led to us losing motivation to cosplay. We spent a lot of time just hanging around in our regular clothes. I’m sure Youmacon is a great convention and this was just one of their off years, but I don’t think that I’ll be attending again. I think I’d rather put my money towards a convention like Katsucon which I have only heard good things about! However, I met so many cool people this year, and I had a great time just sitting in the hotel room talking and hanging out.

If anything, it made for some pretty cool stories! If anybody asks me what the craziest thing I’ve ever done was, I can confidently reply that I took the bus to Michigan with my girlfriends for the weekend while my parents were on vacation, and walked around sketchy downtown Detroit in a maid outfit.

P.S. I changed my URL to lovelycomplex.net! When I found out that the domain was open, it was too good to be true! Please make sure to update your bookmarks/blog rolls! Thank you lovelies!