Hello everyone! This is actually a really outdated post, hence the old water marks. I wrote this last year but forgot about this post in my drafts, so I figured I may as well publish it!

I’d like to start this new blog series! I tend to get quite a few emails asking me about my cosplays or advice on how to start cosplaying, which is quite flattering because I never really expected people to ask me about it! But since this is also a cosplay blog, I figured I’d try to do more cosplay related posts!

Here are just some examples of the cosplays that I’ve done in the past. As you can see, I’m not a professional cosplayer or anything. I just love doing it. I love working on projects and getting to play dressup… in an extreme way. I’ve found that cosplay has helped me become more confident (I used to be really shy around people, and sometimes still am,) and it’s helped me make lots of really good friends! (Some of my best friends are people I’ve met through cosplay!)

These posts will be more directed to newbie cosplayers / people who want to get into cosplaying. This series isn’t to tell you a specific way on how to do things, but to give you an idea by showing you what I’ve done and the mistakes I’ve made! Haha!

Before we start, what is cosplay?

Cosplay (Ńé│Ńé╣ŃāŚŃā¼ kosupure?), short for “costume play”, is a type of performance art in which participants don costumes and accessories to represent a specific character or idea. – Wikipedia

Chances are if you’ve lurked my blog, you’ll have come across pictures of my cosplays! If not, you can click here to read the posts/ see photos!

Today, I’d like to start talking about choosing a character and time management.

Choosing a character to cosplay!

It’s more fun when you’re cosplaying a character you love/have an aspect that you love. If you are able to identify with the character, you’ll have more fun embodying them when you’re dressed up like them! However, I know lots of people cosplay characters simply because they like their outfits! 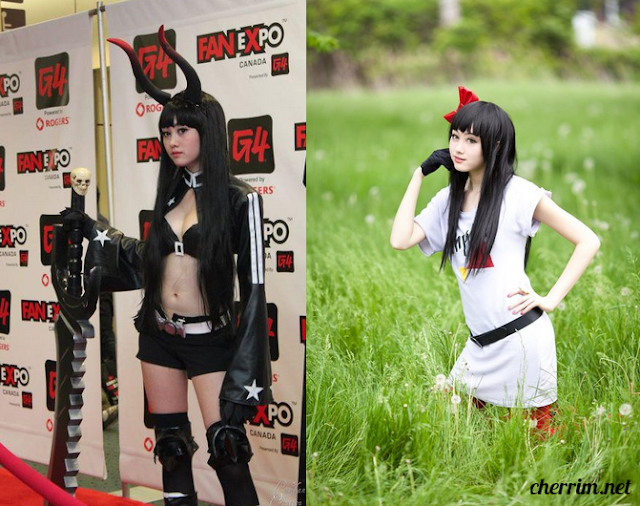 A trend in some of my cosplays that you have have noticed is that I like cosplaying girl characters with long hair that is usually a dark colour. My two favourite characters to cosplay have very different personalities. Akiyama Mio (K-On) is very mature and cute! Black Gold Saw (Black Rock Shooter) is batshit crazy! But the thing is that both of them have long black hair which I think suits my look well and looks natural!

If you’re still finding it difficult to decide on a character, read a few manga! Watch some anime! Play some video games! Watch some cool cosplay videos! Browse cosplay.com or Cure! See if any friends of yours are  doing a cosplay group from a series you like and ask to join! Inspiration will hit you. :]

Also, if this is your first time cosplaying, you might want to stick to a character with an easier outfit! It’ll be easier for you once you gain experience. There are also many cosplay stores such as Cosplayfu, MicCostumes, eBay etc, where you can buy cosplays! But I’ll be going into that later on.


Now that you’ve chosen a character that you want to cosplay, you’ve got to think about time management! You have to take these questions into consideration~

Lots of cosplayers tend to work on parts of their cosplays and then procrastinate/leave the cosplays until a few days before the con, which causes them to rush and pull all nighters! Believe me, avoid this if you can!! You don’t want to be sleep-deprived wearing your rushed costume at a convention because you’ll feel groggy and probably won’t enjoy the convention as much as you’d like.
Personally, I like to start on a cosplay project well in advance of a big convention like Anime North or Fan Expo. It gives me time to plan everything out and work at a comfortable pace.

I usually start collecting references once I decide on a character. The picture above is of the references I collected for my Black Gold Saw cosplay! I typically start a cosplay project about 3 months before a big convention. If you want to commission something, you might want to start a bit earlier because it takes a lot of time for commissioners to work on something + having it shipped to you.
If you’re buying a costume off a website like eBay or another Costumes usually take about 1-2 months to be made and shipped to you. (This is based on the times to ship from China to Canada… it might take longer/shorter time depending on where you live)
I usually take a blank sheet of paper and make a planner/list of things to do, and tape it on my wall. That way when I’m sitting around doing nothing, I can always look for little things on the list to do! Finishing little bits at a time is better than rushing a few days before the event. You’ll have more time to perfect the little details and make the outfit turn out better over the long run!

Have a question? Feel free to leave a comment!